PyF is a text formatting library which was inspired by python f strings.

An example may be better than a thousand words:

Under the hood, it uses TemplateHaskell because I needed the QuasiQuotes for multi-lines support. One of the limitation of TemplateHaskell is poor error reporting. Great care was taken about this and PyF reports errors at precise positions inside the quasi quotes too: 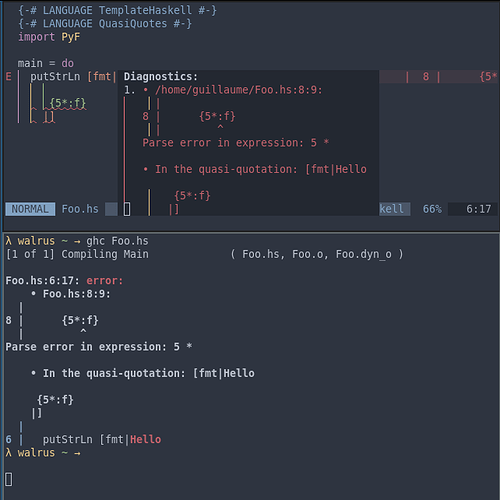 Here you can see that the interpolated expression in the middle of the quasi quotes is wrong, PyF reports this position correctly with a caret in the error message.

Unfortunately, there is no way for TemplateHaskell code to emit located errors which can be interpreted by languages server (here haskell-language-server in vim), so it still reports the error at the beginning of the quasi quotes, but the correct location is displayed in the error message.

The biggest change in 0.10 is the removal of haskell-src-exts and haskell-src-meta dependencies. PyF is now based on the ghc API.

The conversion from the ghc API to template haskell AST is done internally, but I’m sure it can be interesting for any project using haskell-src-meta. I opened a discussion on the GHC bug tracker about integrating this to ghc directly: HsExpr to Template Haskell (#19148) · Issues · Glasgow Haskell Compiler / GHC · GitLab . You are welcome to open a ticket on PyF issue tracker if you want to help me releasing this sub library as an external library.

Thank to the removal of haskell-src-xxx (and the replacement of megaparsec by parsec), PyF have virtual 0 dependencies: it only depends on packages provided with ghc. It was one of the main criticism I received about PyF (the second one was the usage of TemplateHaskell ;).

I’d like to thank @carlosdagos who initiate the rewrite without haskell-src-ext.

And of course, PyF is compatible with GHC 9.2 which was just released, congratulation to all of you.

I hope you’ll find PyF interesting, I’m interested in any feedback in order to improve the library.