Extension for VSCode. Search on Hoogle and Hackage 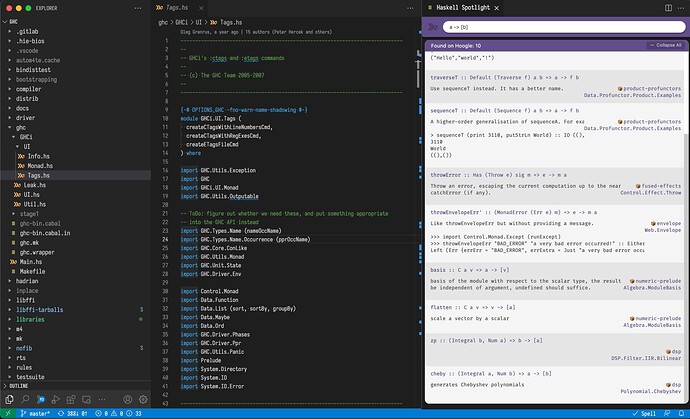 Is it available in VSCodium?

Is it available in VSCodium?

I have no idea.
You can check and if it’s not, provide me instructions on how to publish it for VSCodium.

This is really great, and I’ll definitely be using it! Very little feedback as yet, but will let you know.

This will speed up my “code a little / hoogle a little” workflow tremendously! Thanks a ton for building this plugin!

Thank you!
In case of any suggestions, put them here: VSCode Extension Feedback · Issue #11 · visortelle/hackage-ui · GitHub

I’d just like to say that this extension is fantastic.

I have used it more than once while lecturing to direct students towards relevant documentation or to showcase the examples that exist in some of the better-documented parts of base.

Thank you for putting it together!

I still use it regularly and it’s great. The fact that the small change of having hoogle be a little more accessible made me use it 10x more makes me wonder what other low hanging fruit there is in terms of tooling that would really improve the Haskell coding experience.

I see a lot lo of hanging fruits in the Haskell ecosystem.
Not only in terms of tooling, but also in packages.

It would be great to have resources to be able to continue picking them up. I’m working on it.

I see a lot lo of hanging fruits in the Haskell ecosystem.

Could you please share what you see? Gathering and prioritising a list of such low hanging fruits is extremely important to spread the knowledge how to to improve the ecosystem.

I can try to describe some of them.

I’m a Haskell newbie with a web development background.

When I try to talk about Haskell in web development with former colleagues, I almost always hear something like: “Haskell is a toy, pick Java Spring Boot and don’t be stupid”. I think such an attitude to the language is not a secret.

I found Haskell easy enough to learn it in a reasonable time to the point where you can make web APIs with Servant and Postgres or MongoDB.

I encounter problems when trying to work with not-so-popular databases. If I wouldn’t have a clear understanding of why I wanted to do Haskell at this stage I would have already quit it.

Haskell ecosystem needs much more developers to be able to maintain packages at a comparable level as let’s say Java.

In order to increase the number of developers, Haskell should solve commercial projects’ issues in a better way than other platforms to attract big enterprise users. It’s important to have more enterprises because only this category of clients can afford to spend enough resources to solve gaps in tools they use.

For enterprises, the long-term stability of a platform with a clear releases schedule is very important.
Recently funded GitHub - haskellfoundation/stability: Issues and proposals related to the HF Stability Working Group is trying to solve this issue.

Commercial support is very important for many companies and if I understand it right, there is no such option for Haskell. Probably it has the sense to show that there are people in the community who would be able to fill this gap for money if needed. Register a company, create a website, and actively promote it. It won’t have clients from start, but the existence of such an option would help to pass one of important filters for corporate users.

OK, we still don’t have ready to use framework to take and use for enterprise or startup project. Under the word “framework” here I mean a set of libraries written in more-less consistent style and that work well together.
Such framework may be not too flexible, but I belive that web framework with “All batteries included. Don’t think too much, just take this and that.” approach is a main key for mass language adoption.

It’s important to have a strong leader who can help to develop a roadmap for such framework and help developers to follow it. I very much see Michael Snoyman in this role.

I read some Haskell Foundation’s discussions regarding hopes to attract volunteers. In my opinion, free volunteering won’t solve any problems. You can volunteer for a month or two, but most developers maybe want to help but are too tired after the day at the main job to contribute effectively.
I know people who are bored of working on enterprise projects at a primary job, want to contribute to open-source and learn new stuff.
Probably for Haskell Foundation it has the sense to hire 2-5 full-time contributors in relatively cheap locations to live like Poland, Georgia some Asia countres, and others where you can live quite well for 1000-1500$ netto per month.

I’m sure there are experienced devs (without family and kids yet) who would prefer personal interest over high salary.

Regarding closer fruits that I’m thinking about:

Cool, I replied at a new thread since it’s a bit off-topic for this one.