Anyone know why http://learnyouahaskell.com/ is down?

Yes, I noticed this as well. It’s a shame.
Here’s some stuff I found online to have access to the book.

There is a repository copy of the website here, 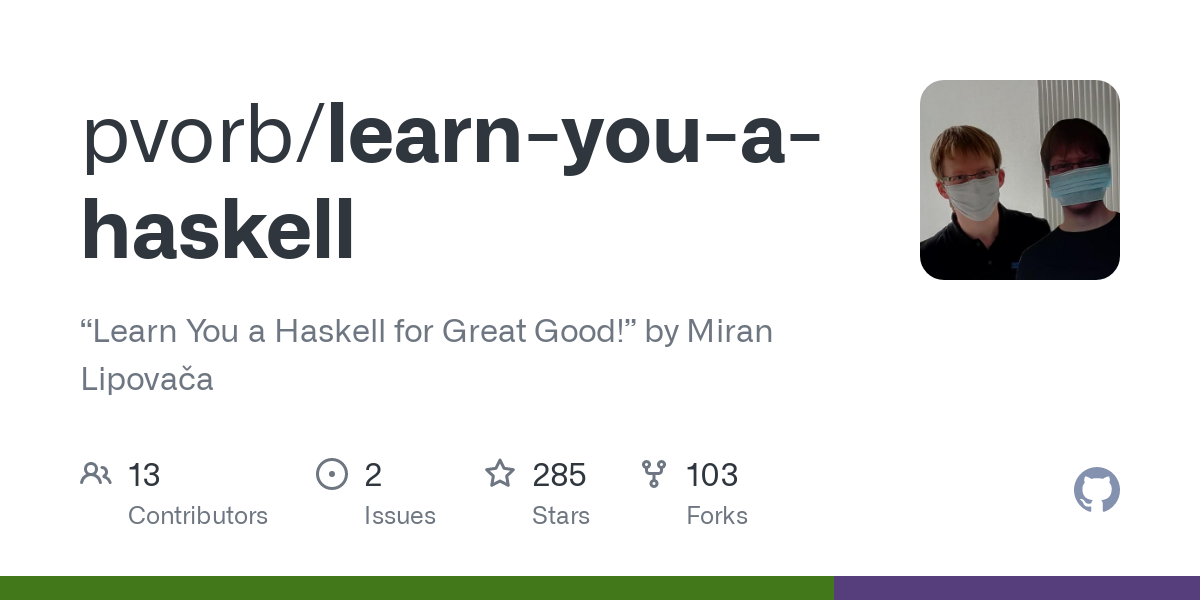 GitHub - pvorb/learn-you-a-haskell: “Learn You a Haskell for Great Good!” by...

And a jupter adaption of it here,

This is a good example of why we need documentation (learning material) that is community-maintained, and officially supported by some org with money.

Look for something that interests you and dive in: All pages - HaskellWiki .

I’ve invested a bunch of my personal time into the wiki already, and I found it to be too much trouble to get positive support from haskell.org (and to a lesser extent, the community in general). I eventually gave up on that effort due to frustration and burnout.

This is an example of why the haskell community needs an authoritative group to take responsibility for addressing the documentation problem.

I’m assuming this is said rarely - thank you for your work; likewise for everyone else who’s worked on the wiki.

I eventually gave up on that effort due to frustration and burnout.

I haven’t given up just yet, but I have eased off for now to attend to some dull “normal space” matters…

This is an example of why the haskell community needs an authoritative group to take responsibility for addressing the documentation problem.

…I thought the HF Documentation Task Force was that group. Regarding this topic, does anyone know what was decided as a result of:

as both threads have fallen silent for some time.

(Sigh) It’s now been a week since the Learnyouahaskell site went offline; in the absence of any further information it looks like it will be staying that way. The most recent snapshot is here:

Miran Lipovača, thank you for your work over the years; may you find continuing success in your future endeavours. While I’m at it, thank you to everyone who worked on and contributed to the now-static School of Haskell site for their efforts (SoH: read-only since 2020-03).

Two sites in two years - which site will be next?

Learn You a Haskell is just BY-NC-SA, so it could be rehosted somewhere else if the need arises. I hope/suspect the problem is just of administrative nature — who has not ever had issues with registars, hosting, etc? —, so let us give it little bit more time before despairing, I say.

Yeah I really think that people are overreacting to this. The physical and pdf version of the book can still be purchased from No Statch Press, as just pointed out it is under CC so anybody can host it online if they want to, and most importantly we really just have no idea what actually happened. A few days before site went down there was a discussion of the book on r/haskell where some of the offensive language of the book was pointed out; maybe it was taken down to finally fix those issues? Maybe it’s just a hosting issue? It’s only been a week.

But even still if it did go down for good, there are much better introductions to the language out there now and the book is still widely and freely available in multiple places for anyone who wants to use it. This is not the end of Haskell, even if the site goes down for good. If the success of Haskell as a language rested on one specific way of accessing one slightly out of date introduction to the language, we’d be in a horrible place. Thankfully, that’s not the world we live in.

Site is back up.

This is an open-source fork (clone) of LYAH: https://learnyouahaskell.github.io/. I decided to create this open-source fork (with the author’s permission) to enable the Haskell community to participate in preserving and maintaining this awesome resource for future times. The idea behind the fork is to enable a way to submit and incorporate suggestions for edits and updates for LYAH from the community as Haskell evolves and changes. Additionally, it should be a zero-downtime version as in the past the original LYAH has had significant downtimes for long periods. 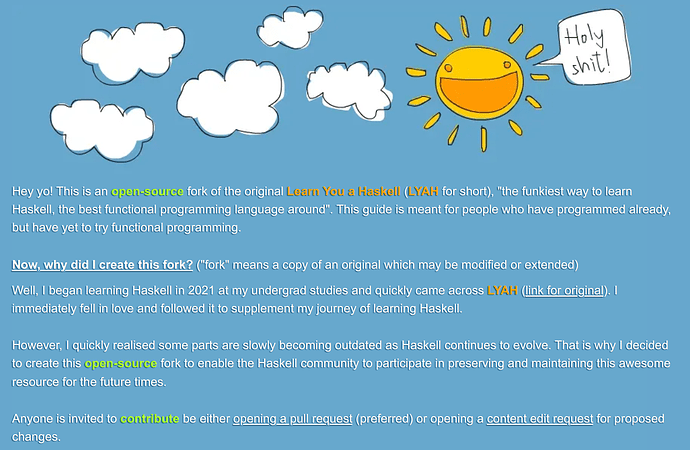 This is still a work in progress. Happy for any suggestions or feedback!

thread for discussion: Learn You a Haskell: A community version